The Schleich Standing Sow Figure depicts a female pig that can be found on farms and in the wild on every continent except Antarctica. Pigs are known to be very intelligent and quick learning animals and are actually the fourth smartest animals in the world. Because pigs have no sweat glands they enjoy rolling around in the mud to cool their skin but despite contrary belief of being dirty animals, pigs are one of the cleanliest. The scream of a frightened pig can measure 115 decibels which is louder than the scream of a jet engine taking off (113 decibels). The Sow is based on nature and is highly detailed and hand-painted.

Be the first to review “Schleich- Pig” Cancel reply 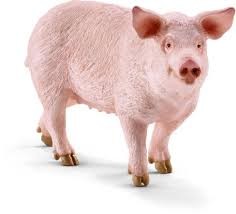