Favory Airiella and Airiella – One of Europe’s oldest horse breeds, the Lipizzan originated in the 1500s during the time of the Austrian Empire. The breed gets its name from Lipizza (Lipica), Slovenia – the location of one of the first established stud farms. Today, the breed is highly sought after for their natural talent in performing classical dressage. Tempel Lipizzans of Illinois was founded in 1958 to promote this incredible breed and promote classical dressage and is the largest privately-owned herd in the world! Through their breeding and training program, they combine some of the oldest Lipizzan bloodlines with the same classical traditions and principles as the Spanish Riding School. Each summer, they offer public exhibitions which showcase the Lipizzan and the progression of classical dressage training. Stallion Favory Airiella has been trained for the courbette, a difficult maneuver where a horse balances on its hind legs and jumps forward several times. He demonstrates this maneuver during the Airs Above Ground Segment (haute école) in Tempel Lipizzans’ performances. His talent is part training, and part genetics: his sire was a levade horse, and his dam-sire was a capriole horse! Favory Airiella is a descendent of the original horses bred at the State Stud at Lipizza. Favory Airiella’s dam, Airiella, also resides at Tempel Farms. Noted for her nobility and athletic build, she’s known for producing intelligent and athletic offspring. You’ll notice that she and her son share part of their name. That’s because Lipizzan stallions get the first part of their name from their sire’s line (Favory) and the second part from their dam’s line (Airiella). Through their commitment to both the Lipizzan breed and classical dressage, Tempel Farms is doing their part to ensure that the tradition and bloodlines of classically trained Lipizzans live on! From the Manufacturer: Breyer is the maker of the world’s finest model horses! Since 1950, Breyer has brought a wide range of horse breeds from around the world to life for play and collecting – including real horse heroes like racehorse Secretariat, Olympian Valegro, and reining superstar Big Chex to Cash! The Traditional Series offers an unmatched level of realism and attention to detail that is appreciated by children and adults alike. Each 1:9 scale model is meticulously hand painted in rich colors, so no two are the same. Breyer has an incredible community of model horse fans, artists, and collectors, and is proud to host BreyerFest: a three-day extravaganza for horse lovers and Breyer enthusiasts each July in Kentucky! Bring home a Breyer model, and let your imagination run free! Breyer Traditional Series: What started 69 years ago with a model horse created to decorate a clock has since become Breyer’s most iconic series, the one that revolutionized the hobby and still dominates the market. Sculpted in every color and breed imaginable, with unmatched realism and breathtaking hand painted detail, Breyer’s Traditional Series (1: 9 scale) is a longstanding favorite among children and adults the world over. Fans who play with these beloved models can build entire worlds around them with realistic accessories like barns, fencing, tack, trailers and even riders. About Breyer: The Breyer Promise – The Breyer “promise” is the commitment we make to you, our fans. With Breyer, you are getting a real horse of your very own. Whether a traditional best-seller or brand-new product, every Breyer horse is created by hand, under the watchful eye of the world’s leading equine experts. Our commitment to high quality material and hand crafting mean that just like in nature, no two Breyer models are exactly alike. Because nothing is as magical as having a horse of your very own. Quite simply, we want to help everyone discover how inspiring horses can be. 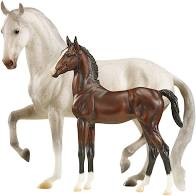