Dominant XXIX was the first qualified pure Raza Española (pre) stallion imported to the USA. Soon after arriving at snowy Peaks ranch, five-year-old “Dom” was named camp eon de La Raza (champion stallion) at the 2005 foundation for the pure Spanish horse’s National celebration show. As his show career continued, so did his success – both in-hand and under saddle. his achievements include being the only pre stallion to have twice been named the champion stallion at National celebration shows, and the only pre stallion to have been named both the champion stallion and overall champion of functionality at any National celebration show! Dom’s versatility Also shines in the dressage arena. In 2011 the USA ranked Dom 10th in intermediate I dressage and in 2015 he competed in the user young Adult ‘bra end tin a cup’ dressage National Championship. a sire of champions, his offspring includes Breyer portrait horse goose SCS! brayer traditional Series: what started 69 years ago with a model horse created to decorate a clock has since become Breyer most iconic series, the one that revolutionized the Hobby and still dominates the market. Sculpted in every color and breed imaginable, with unmatched realism and breathtaking hand painted detail, Breyer Traditional Series (1: 9 scale) is a longstanding favorite among children and adults the world over. Fans who play with these beloved models can build entire worlds around them with realistic accessories like barns, fencing, tack, trailers and even riders. about Breyer: The Breyer Promise – the Breyer “promise” is the commitment we make to you, Our fans. With Breyer, you are getting a real horse of your very own. Whether a traditional best-seller or brand-new product, every Breyer Horse is created by hand, under the watchful eye of the words leading equine experts. Our commitment to high quality material and hand crafting mean that just like in nature, no two Breyer models are exactly alike. Because nothing is as magical as having a horse of your very own. Quite simply, we want to help everyone discover how inspiring horses can be. 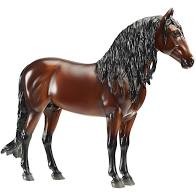